Police service dogs (K-9s) are used in law enforcement primarily because of their superior scenting and locating abilities. Police K-9s' superior sense of smell and the ability to recognize and respond to a wide variety of scents allow them to locate persons and contraband much more efficiently and effectively than humans.

A police K-9's secondary function is as a "use-of-force" tool. They can be deployed by their handler in situations that require immediate apprehension of violent and dangerous criminals who attempt to avoid arrest by fleeing and/or hiding. A police K-9 allows the police department to resolve dangerous situations in a more safe and efficient manner.

Both dogs are used as locating tools and are trained to conduct building and large area searches for hidden criminals, tracking lost persons and criminals, article/evidence searches, and narcotics detection. The dogs are also featured at numerous community education functions and public canine agility demonstrations.

Both Rex and Jet were imported from eastern Europe and bred specifically for police work. The dogs and their handlers then completed a 12-week training program at the St. Paul Canine Training Center before going to work, where they are used for criminal apprehension, tracking, evidence search and recovery, and narcotics detection.

Burnsville's canine unit started in 1982 with Starsky. Fourteen dogs have served in the unit:

Donations to the K-9 fund help secure training and equipment. Any amount is appreciated! 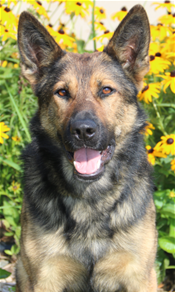