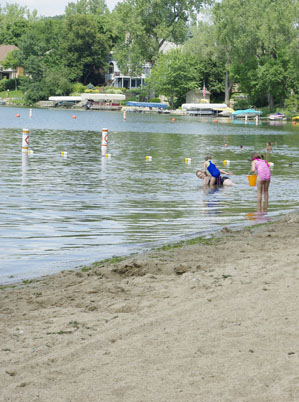 Memorial Day until Labor Day. If the level exceeds the standards set by the Minnesota Pollution Control Agency (MPCA), the beach will be closed temporarily until the readings return to a safe level. Information about the Minnesota state rule referencing E. coli levels for recreational waters is found below:

Minnesota Rule 7050.0222 Specific Water Quality Standards for Class 2 Waters of the State; Aquatic Life and Recreation: E. coli levels not to exceed 126 organisms per 100 milliliters as a geometric mean of not less than five samples representative of conditions within any calendar month, nor shall more than ten percent of all samples taken during any calendar month individually exceed 1,260 organisms per 100 milliliters. The standard applies only between April 1 and October 31.

The entire rule regarding water quality for recreational waters in Minnesota can be found here: Minnesota Rule for Recreational Water Quality Standards.

E. coli is short for Escherichia coli, the scientific name for a group of bacteria found in the intestines and feces of warm-blooded animals such as mammals and birds. While most of the hundreds of strains of E. coli are harmless (one notable exception associated with food contamination is E. coli O157:H7), their presence can indicate sewage or feces-contaminated water which may include pathogens (disease-causing organisms).

Direct testing for pathogens is expensive and impractical, as pathogens are rarely found because they usually occur sporadically and at low levels. Instead of testing for the pathogens themselves, public agencies test for the presence of "indicator" species, so called because their presence indicates that sewage or fecal contamination may have occurred. The two most commonly used indicators for recreational waters are fecal coliforms and E. coli.

Three samples are collected weekly from Crystal Lake beach with results listed in the table below. If E. coli levels exceed those listed by the state, the beach will be closed temporarily until further testing shows safe levels.

Conditions which impact E. coli levels include rainfall (materials harboring the microorganisms can be washed into the water from the surrounding landscape), concentrated waterfowl numbers (one reason why feeding waterfowl is prohibited), and high temperatures. For more information, call 952-895-4500.

CURRENT STATUS: The test results are meeting the Minnesota standard for recreational waters.

Results are given in MPN/100 ml (approximate number of viable cells per 100 milliliters), and geometric means are calculated from last five results of the sample group.